Last week => The market confirmed a technical bounce in order to prepare the key risky assets for the next big US Rate decision. For now only #ETH surpassed 1600 resistance (outperformer) while  #BTC remains below 21100 and #SNP500 below 3940 resistance

We are now watching closely the capacity of the market to hold above setback support this week. The confidence is here on ETH and we will watch closely  SNP500, not yet on BTC which stays underperformer. 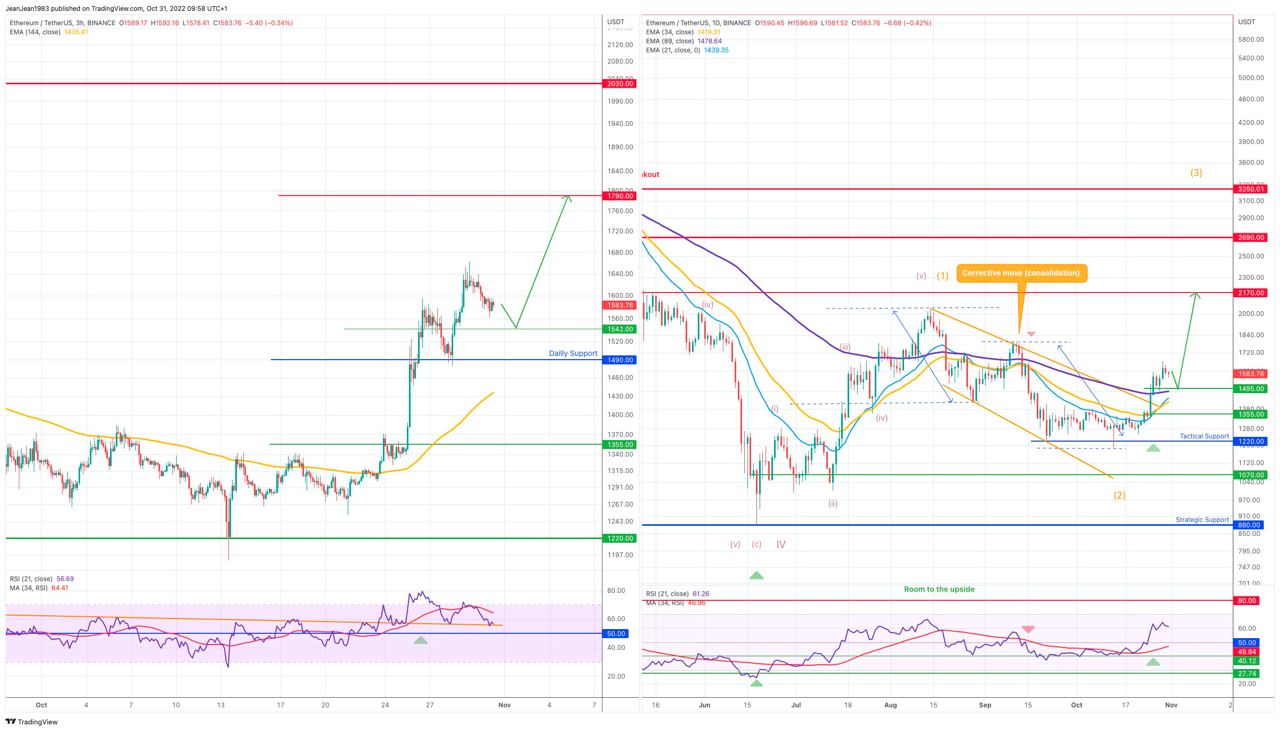 Ethereum [ETH] top ten investors holding their assets off exchanges added about 6.7% more of the number one altcoin, according to a recent update from Santiment.

The on-chain analytic platform reported that the top ten non-exchange addresses, at press time, held 23.7 million ETH.  This was a clear distinction of the status of the top ten addresses on exchanges which held about 8.7 million.

The recent crypto relief rally has seen some assets outperforming, and ETH has been one. Here are some of the possible reasons.

Crypto markets have gained more than 9% over the past week, sending total capitalization back over the $1 trillion level again.

Some crypto assets have performed better than others, and Ethereum has been making more gains than its big brother over the past seven days. During the rally, which began on Oct. 25, Ethereum gained 17% to current levels. Bitcoin, however, only managed to make 6% over the same period.

Institutional asset manager Grayscale stated that it could be to do with Ethereum supply growth in a Nov. 1 market report.

“From a fundamental perspective, ETH’s slowing supply growth post-merge has been a partial driver to outperformance relative to BTC.”

Before the Merge, Ethereum miners had to sell the asset to cover their expenses, just as Bitcoin miners do. But since the network transitioned to proof-of-stake in mid-September, that selling pressure has been vastly reduced.

Another aspect of Ethereum’s attraction is its reduced supply issuance. The report noted that since the Merge, the issuance of the second-largest crypto has decreased by around 14,000 ETH per day or around 5 million fewer per year.

Surprisingly, ETH looks poised for the sustenance of its recent increase. According to the four-hour chart, the Directional Movement Index (DMI) was in favor of the buyers.

Indications from the DMI showed that the buying power (green) at 28.30 was well in control over the sellers (red). Additionally, the Average Directional Index (ADX) was in support of an improved ETH price. With the ADX (yellow) At 31.55, ETH had a strong movement in the upward direction.

Join our 60k+
tribe of Akters

About the AKTIO coin

Learn more about the AKTIO coin

What’s new in the App?

Find out more about the App